What Was the First Muscle Car? 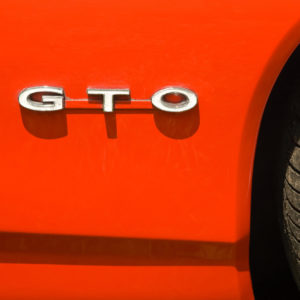 The muscle car is a cherished American tradition. Muscle cars aren’t just revered by industry insiders and classic-car enthusiasts –– they’re iconic figures in popular culture and in American history. Indeed, it’s impossible to hear certain words –– “Mustang,” “Charger,” “Tempest” etc. –– without immediately thinking about classic cars from the 1960s and ‘70s. Given all that, it’s somewhat surprising that there isn’t a consensus among experts as to the origin of the muscle car. What was the first muscle car and when was it built? Though we might not be able to provide a definitive answer to this question, we’ll review some of the best candidates throughout history here:

What is a Muscle Car?

It’s tough to identify the “first” muscle car in part because the definition of a muscle car is rather loose. Generally speaking, muscle cars contain a big, high horsepower engine, are made by American companies, and have a powerful-looking exterior. As one can imagine though, lots of sports cars fit those descriptions. Still, we’ll aim to keep this list focused on vehicles that are typically considered muscle (or pre-muscle) cars.

The golden age of the muscle car in the US was certainly the late 1960s and early ‘70s. So it’s no surprise that the car that launched the era of the muscle car is often considered to be the original. Make no mistake, the 1964 Pontiac GTO is a fantastic car with a fascinating history. It was designed by industry legend John DeLorean, and famously contains a full-size 389 engine within its, comparatively, small frame. For many people, the GTO is a prototypical muscle car and it calls to mind a time and place that is most often associated with the production of muscle cars. On the other hand, though, it is not the only candidate that is worthy of consideration.

The other popular pick for the “first” muscle car is the 1949 Oldsmobile Rocket 88, and there’s one big reason why. After all, this was the first car to feature a high-compression overhead valve V8 engine. And, like the 1964 GTO, this engine was stuffed into a smaller body from a larger model. (The Rocket’s engine originally came from the Oldsmobile 98.)

Compared to the other cars of the era, the Rocket 88 was a revelation –– combining low-end torque speed with high-end muscle. Unsurprisingly, it was a hit on the race tracks as well. The Rocket 88 won eight out of the ten NASCAR races held that season. Subsequently, it brought sports vehicles into the V8 age.

These cars may not have the name recognition of the Rocket 88 or the GTO, but they did play a role in the development of the muscle car:

Arguably, this car set the precedent for cramming a big, powerful engine into a vehicle with a sleeker frame. Fun fact: the 1938 model update managed to eclipse the 100-mph mark.

Renowned for its racing ability, this classic car is held by some to be the first muscle car of the 1950s.

1955 was a big year for American car manufacturers. Both Chevrolet and Ford rolled out cars that were considered vast improvements on previous models. Plus, the Chrysler C-300 was one of –– if not the first –– cars to be named and marketed for its horsepower.

Regardless of what you consider to be the first muscle car, one thing remains certain. We love muscle cars and we love working with our customers to restore them to their former glory. At Precision Restorations, we can handle every aspect of a classic car restoration from the paint job, to the shocks and springs, and everything in between. (Plus we offer restomod services too!) Contact us toll-free at 1-844-503-8118, or email me directly at [email protected]. We love talking about restoring classic cars!