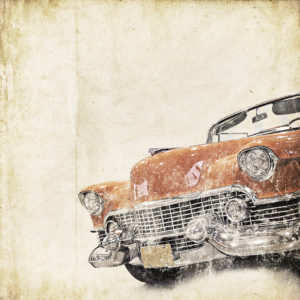 Most people have never actually driven a classic muscle car before. Perhaps that’s why the term “muscle car,” has become interchangeable with “sports car” in popular culture. But once you actually get behind the wheel of a true muscle car, it’s easy to see why it’s unlike most other cars on the road –– sports cars included. What exactly makes muscle cars so special, though? And how is a sports car vs muscle car defined? We’ll tackle those questions and more here:

There is no definitive list of “muscle cars” and “non-muscle cars.” And as the years have gone by, some of the lines that traditionally separated sports cars from muscle cars have begun to blur. For our purposes though, we’ll focus on a few features that set muscle cars apart from the rest of the pack.

Muscle cars are fabulous road-trip cars. On smooth highways and straight roads, muscle cars can express their full potential. However, traditional sports-performance vehicles (sports cars) have lighter bodies that make them more adept at taking turns, and they generally handle more smoothly. In addition, a true muscle car can prove expensive –– even within the context of higher-end cars. At the end of the day muscle cars aren’t superior to other sports cars, merely different.

The golden era of the muscle car was undoubtedly the late 1960s and early 1970s. Ford Mustangs, Dodge Chargers, and Chevy Chevelles from that era inspired millions of muscle-car fans across the country. If you’re a muscle car fanatic –– and you’ve always dreamed of restoring a great muscle car –– then get in touch with us. You can contact us toll free at 1-844-652-1966 today, or email me directly at [email protected]. We love talking about restoring classic cars!