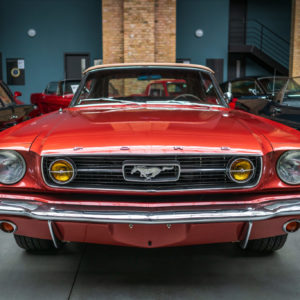 Classic cars –– just like modern vehicles –– come in all different shapes and sizes. Then, as now, manufacturers created different cars for different target markets. Of course, one of the most popular and enduring types of car from the late 1960s and early 1970s is the uniquely American muscle car. Yet, the term muscle car has always been somewhat vague. Some even use “muscle car” interchangeably with “sports car.” To be fair, it can be somewhat difficult to differentiate a muscle car from a regular sports car. And the muscle car vs pony car debate is even more muddled. Here, we aim to clear up the confusion and explain the origins and differences between classic pony cars and muscle cars:

What is a Pony Car?

The pony car is a product of a very specific time and place in the American car market. While there is some contention around who designed the first sports car or muscle car, virtually no one questions the origin of the pony car. Rather, basically everyone agrees that the first pony car was the 1964 ½  Ford Mustang. (“Pony car,” and “mustang” are connected terms in this regard.) What made the ‘64 ½  Mustang so special was that it was one of the first high-performance vehicles with mass appeal. Indeed, Mustangs and all subsequent pony cars tended to be affordable, widely available, and customizable. You can think of a pony car as a particular kind of sports car –– an affordable coupe with rear-wheel drive and a long hood that could still seat four people.

Because the ‘64 ½  Mustang proved to be so popular , it didn’t take long for other manufacturers to follow Ford’s lead and introduce their own version of the pony car. Well-known examples of classic pony cars include vehicles like the Pontiac Trans Am, the Plymouth Barracuda, and the Chevy Camaro.

Muscle cars share many similarities with pony cars. Both muscle cars and pony cars are typically coupes or convertibles. Both tend to have long hoods. And both have high-performance capabilities. The main difference, and for some classic car enthusiasts the only substantial difference, comes down to the engine. Muscle cars typically contain a very large and powerful engine –– at minimum a V8. So for many people, if a classic sports car doesn’t have a V8 engine, it isn’t a muscle car. Examples of classic cars that fit this strict definition include the Plymouth Road Runner and Shelby Cobra.

This means that telling the difference between a “true” muscle car and a pony car is often a matter of inspecting an individual car. It was possible for consumers to purchase many sports cars with either a small block or large block engine. So certain models may be either a pony car or a muscle car –– depending on their engine size.

To sum up, while pony cars and muscle cars have a lot in common, muscle cars are usually slightly bigger and contain a more powerful engine.

We love muscle cars and pony cars, and we love working with our customers to restore their vehicles to their former glory. At Precision Restorations, we can handle every aspect of a classic car restoration from the paint job, to the shocks and springs, and everything in between. (Plus we offer restomod services too!) Contact us toll-free at 1-844-503-8118, or email me directly at [email protected]. We love talking about restoring classic cars!