Precision Mustang RestorationThe Ford Mustang is an automobile manufactured by the Ford Motor Company. It was initially based on the Ford Falcon, a compact car. Production began in Dearborn, Michigan on 9 March 1964 and the car was introduced to the public on 17 April 1964 at the New York World’s Fair.

It was Ford’s most successful launch since the Model A.

Executive stylist John Najjar, who was a fan of the World War II P-51 Mustang fighter plane, suggested the name.

The Mustang created the “pony car” class of American automobile – sports car-like sedans with long hoods and short rear decks -and gave rise to competitors such as GM’s Camaro AMC’s Javelin, and Chrysler’s revamped Barracuda. It also inspired coupés such as the Toyota Celica and Ford Capri, which were exported to America.

Mustangs grew larger and heavier with each model year until, in response to the 1971-1973 models, fans of the original 1964 design wrote to Ford urging a return to its size and concept.

Although some other pony cars have seen a revival, the Mustang is the only original pony car that has remained in production without interruption after four decades of development and revision.

Precision Mustang restorations are always fun and interesting projects. Our clients, that are Mustang enthusiasts, are dedicated to the car and typically have been either the owner of the vehicle since new or had one as a first car. We’ve restored hard tops, convertibles and the classic fastback. We work with the best parts suppliers in the country and it’s always a collaboration when we do a Mustang. Our staff enjoy working on all generations of Mustangs, we have customized several of the new generation Mustangs.

Precision Restorations is a St. Louis, Missouri-based leader in the automotive and truck restoration industry. The company specializes in customization and show-quality paint work, as well as mechanical and interior/exterior restoration for antique, vintage and classic vehicles.

The future of the classic automobile is etched in history; these cars are becoming more desirable everyday. The days of sending these cherished icons to the scrapyard or allowing them to rust away are over. Precision Restorations is able to provide the quality service required for the fortunate classic automobile owners that have been privileged with the responsibility to preserve our great automotive history.

The company’s mission is simple: to provide customers with the most trustworthy personal service and quality craftsmanship available in the marketplace today. Precision Restorations is committed to making customer communication and satisfaction a priority. It is truly a place where memories come alive to drive. 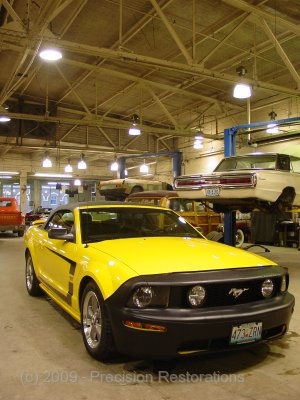