Precision Corvette RestorationThe Chevrolet Corvette is a sports car that has been manufactured by General Motors (GM) since 1953. The car was originally designed by Harley Earl, and named by Myron Scott after the fast ship of the same name. Originally built in Flint, Michigan and St. Louis, Missouri, it is currently built at a General Motors assembly plant in Bowling Green, Kentucky. The National Corvette Museum and annual National Corvette Homecoming, also located in Bowling Green, celebrate the car’s history.

There have been six generations of the Corvette produced so far, sometimes referred to as C1 through C6, and various versions with differing features within each generation; the current C6 generation includes the ZR1, which has the most powerful engine used in a production Corvette to date. Over the years, versions of the car have won awards from magazines such as Motor Trend and Car and Driver and from organizations like the Society of Automotive Engineers, and have been used from time to time as pace cars for the long-running Indianapolis 500 race since 1978.

While sold under the Chevrolet marque in the United States and other locations, it is sold under its own Corvette marque in Europe and Japan. The car is built in coupé and convertible versions; the possibility of a sedan version has also been considered by GM executives

General Motors hired designer Harley Earl in 1927. Earl loved sports cars, and GIs returning after serving overseas in the years following World War II were bringing home MGs, Jaguars, Alfa Romeos, and the like. In 1951, Nash Motors began selling a two-seat sports car, the Nash-Healey, that was made in partnership with the Italian designer Pinin Farina and British auto engineer Donald Healey. Earl convinced GM that they also needed to build a two-seat sports car. Earl and his Special Projects crew began working on the new car later that year, which was code named “Opel.” The result was the 1953 Corvette, unveiled to the public at that year’s Motorama car show. The original concept for the Corvette emblem incorporated an American flag into the design, but was changed well before production since associating the flag with a product was frowned upon.

Taking its name from the corvette, a small, maneuverable fighting frigate (the credit for the naming goes to Myron Scott), the first Corvettes were virtually hand-built in Flint, Michigan in Chevrolet’s Customer Delivery Center, now an academic building at Kettering University. The outer body was made out of then-revolutionary fiberglass, selected in part because of steel quotas left over from the war. Underneath the new body material were standard Chevrolet components, including the “Blue Flame” inline six-cylinder truck engine, two-speed Powerglide automatic transmission, and drum brakes from Chevrolet’s regular car line. Though the engine’s output was increased somewhat, thanks to a triple-carburetor intake exclusive to the Corvette, performance of the car was decidedly lackluster. Compared to the British and Italian sports cars of the day, the Corvette was underpowered, required a great deal of effort as well as clear roadway to bring to a stop, and even lacked a “proper” manual transmission. Up until that time, the Chevrolet division was GM’s entry-level marque, known for excellent but no-nonsense cars. Nowhere was that more evident than in the Corvette. A Paxton supercharger became available in 1954 as a dealer-installed option, greatly improving the Corvette’s straight-line performance, but sales continued to decline.

GM was seriously considering shelving the project, leaving the Corvette to be little more than a footnote in automotive history, and would have done so if not for two important events. The first was the introduction in 1955 of Chevrolet’s first V8 engine (a 265 CID [4.3 L]) since 1919, and the second was the influence of a Soviet émigré in GM’s engineering department, Zora Arkus-Duntov. Arkus-Duntov simply took the new V8 and backed it with a three-speed manual transmission. That modification, probably the single most important in the car’s history helped turn the Corvette from a two-seat curiosity into a genuine performer. It also earned Arkus-Duntov the rather inaccurate nickname “Father of the Corvette.”

Another key factor in the Corvette’s survival was Ford’s introduction, in 1955, of the two-seat Thunderbird], which was billed as a “personal luxury car”, not a sports car. Even so, the Ford-Chevrolet rivalry in those days demanded that GM not appear to back down from the challenge. The “T-Bird” was changed to a four-seater in 1958.

Precision Corvette restorations, as one may imagine, are an exact process. Corvette owners have one thing in common, they all know they posses one of the greatest American icons ever. Restoring the Corvettes back to original specifications makes up the majority of the restorations, Though we have had custom Corvettes come through the shop, we typically are restoring back to original specifications. It is always exciting to work on a Corvette. These were built right the first time and therefore are fairly straightforward when restoring. We have expert technicians that can work with the fibreglass bodies. There is no shortage of information and parts for the Corvette restoration and these restorations go very smoothly.

Precision Restorations is a St. Louis, Missouri-based leader in the automotive and truck restoration industry. The company specializes in customization and show-quality paint work, as well as mechanical and interior/exterior restoration for antique, vintage and classic vehicles.

The future of the classic automobile is etched in history; these cars are becoming more desirable everyday. The days of sending these cherished icons to the scrapyard or allowing them to rust away are over. Precision Restorations is able to provide the quality service required for the fortunate classic automobile owners that have been privileged with the responsibility to preserve our great automotive history.

The company’s mission is simple: to provide customers with the most trustworthy personal service and quality craftsmanship available in the marketplace today. Precision Restorations is committed to making customer communication and satisfaction a priority. It is truly a place where memories come alive to drive. 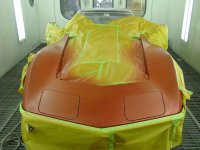